My name is Benjamin Dumke-von der Ehe, I live in Berlin, I work for Stack Overflow, and I'm pretty sure I'm the only person in the world who liked all three parts of The Matrix.

In real life, I'm commonly known as Ben; online, I usually go by the handle of balpha. This goes back to a story from school, where a teacher enumerated the three Benjamins in class using greek letters. I was the first (naturally), hence “Ben alpha”.

For lack of notability, I do not have a Wikipedia page, so I'm afraid you have to believe whatever I tell you about me here.

Since that's about as much pseudo-social interaction I can bear, you won't find me on Facebook, MySpace, or any of the like. Well, I did have a Geocities page in the 90s. I don't want to talk about it. 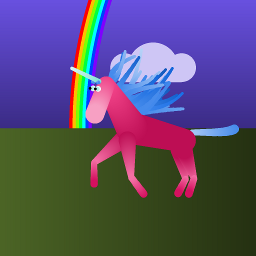 Head over to Unicornify for my probably best-known freetime project.

Rumor has it that the only reason I got hired by Stack Overflow was to stop me from spamming Meta Stack Overflow with these colorful ponies. These rumors are unconfirmed, though.

Unicornify is written in Python, which is still my favorite programming language, even though I haven't done much with it recently. Most of my work for Stack Overflow involves C# and JavaScript, and I do like both of them as well.

However, I still maintain my opinion that considering assignment an expression causes more harm than good.

As for actually useful stuff, I created Moonshiner, a GUI for Ghostscript's PS-to-PDF converter. It's not exactly an example of good coding (it was also a project for me to learn Python), but I use it regularly, and I've heard from a few people that they like it as well.

You can reach me at mail at firstname dash first-five-letters-of-lastname dot my-country's-tld. All original content is licensed under CC-BY-SA 3.0 unless otherwise noted.

Big thanks go to Jos Buivenga for his awesome font Fontin used here, and to Font Squirrel for their great @font-face Kit Generator.